Today we have talented historical romance author, Shelley Munro! She's penned a brilliantly interesting post on The Frost Fair and how she weaves this event into her soon-t0-be-released historical, Mistress of Merrivale. Shelley also has a contest running this week. Leave a comment, do the Rafflecopter thingie's bidding and you shall have a chance at winning The Spurned Viscountess!

Let’s travel back in time…

Imagine yourself in England—London, to be precise. It’s almost Christmas or Yule, and it’s cold. There’s an air of excitement because the Thames has frozen over. Traders are rubbing their hands together. Local residents are anxiously watching proceedings. Children are gleeful because if the cold snap continues, the ice will be thick enough for a Frost Fair.

So what is a Frost Fair? Here’s the scoop. The old London Bridge caused the water to run slowly and during cold conditions the water froze, sometimes for months. When the ice was thick enough to support weight, the frozen Thames became a playground. Locals played games and skated on the ice. Local traders set up booths and the crowds flocked to the Thames to join in the festivities.

I write historical romances set during the 18th century, a little before the official Regency period. If the characters from The Spurned Viscountess and Mistress of Merrivale were to travel to London for the Yule season they might go shopping for trinkets and gifts to give their loved ones.

So let’s get back to the fun.

Jocelyn and Leo Townsend from Mistress of Merrivale are strolling on the ice. Leo has his daughter’s hand firmly in his grasp. Cassie’s eyes are wide as she gazes at a juggler. Then a puppet show grabs her attention. Jocelyn laughs and together, she and Cassie drag Leo over to join the crowd.

Once the show finishes, they visit a ribbon seller. Jocelyn buys several ribbons to give as gifts and lets Cassie choose one for herself. Cassie picks a scarlet ribbon and insists that Jocelyn tie it in her hair immediately.

Leo buys cups of hot cider and slices of spicy gingerbread. They meander through the crowds and pause to watch some acrobats. A roar comes from across the way, an animalistic growl and a louder shriek. Jocelyn takes on quick look in that direction and urges Cassie to move on to see the sailing ship, stuck firmly in the middle of the ice. There’s no need for Cassie to catch a glimpse of the bear baiting.

Occasionally, the ice creaks. A group of children jeer at a hunchback while three young maids giggle and clap at the antics of a strolling minstrel.

The hour grows late, and Leo, Jocelyn and Cassie make their way to their carriage. Cassie goes to sleep on the way home while Jocelyn cuddles against her husband’s side. His hand rests on her rounded stomach, and they both laugh softly when their baby kicks. A family outing to the Frost Fair ends with love and a snatched kiss just before the footmen opens the carriage door, and Leo hustles them inside out of the cold.

Note: The last Frost Fair took place during the winter of 1813-1814 when the ice was thick enough to lead an elephant across the river near Blackfriars Bridge. New innovation during the Victorian era increased the flow of the river and ended the entertainment known as the Frost Fair.

Sources: London by Peter Ackroyd, Georgian London, Into the Streets by Lucy Inglis and Daily Life in 18th Century England by Kirstin Olsen.

Meet Jocelyn and Leo in Mistress of Merrivale, due out March 2014, and currently available for pre-order at Amazon http://amzn.to/1eW93rW 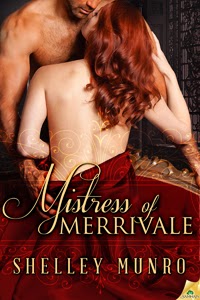 Jocelyn Townsend’s life as a courtesan bears no resemblance to the life she envisioned in girlish dreams. But it allows her and her eccentric mother to live in relative security—until her protector marries and no longer requires her services.

Desperate to find a new benefactor, one kind enough to accept her mother’s increasingly mad flights of fancy, Jocelyn is nearly overwhelmed with uncertainty when a lifeline comes from an unexpected source.

Leo Sherbourne’s requirements for a wife are few. She must mother his young daughter, run his household, and warm his bed. All in a calm, dignified manner with a full measure of common sense. After his late wife’s histrionics and infidelity, he craves a simpler, quieter life.

As they embark on their arrangement, Leo and Jocelyn discover an attraction that heats their bedroom and a mutual admiration that warms their days. But it isn’t long before gossip regarding the fate of Leo’s first wife, and his frequent, unexplained absences, make Jocelyn wonder if the secrets of Merrivale Manor are rooted in murder…

Warning: Contains mysterious incidents, a mad mother who screeches without provocation, scheming relatives, and a captivating husband who blows scorching hot and suspiciously cold. All is not as it seems…and isn’t that delicious?

Shelley Munro lives in New Zealand with her husband and a cheeky puppy called Bella. To learn more about Shelley and her books visit her website at http://www.shelleymunro.com

CONTEST: Leave a comment, complete the rafflecopter and go into a draw to win an e-copy of The Spurned Viscountess by Shelley Munro.

Thanks for stopping by!

the fair sounds like a lot of fun, these should make a comeback so people can unplug from technology and have fun with family outside even for a couple hours.

Char - they do sound like a lot of fun, don't they. Some years the river was frozen over for a long time and it was very good for business. They also had summer fairs and some of those were very raucous and the church and some local residents wanted them banned.

I agree out family fun. There are so many distractions these days.

Thanks for stopping by :)

I'm looking forward to reading this. :

I enjoyed learning about the Frost Fair. :) Sounds like a great book Shelley. Congrats on the upcoming release!

Thanks, Mary. I hope to write more historicals soon. I have a great idea for a series...

Thanks, Danita. I found the idea of Frost Fairs fascinating. Our ancestors knew how to make fun out of winter and cold ice!