#FiveSentenceFriday Who's Creeping on the Corner?

I'm starting something new with a bunch of author friends called Five Sentence Friday. We're posting five lines from a book or WIP.

Since this is a brand new adventure, I'm posting five lines from the very opening of Chasing Time from my new Bonded Souls series (which isn't out yet). But HEY, join my newsletter to find out when Chasing Time will be out, as well as enjoy some freebies, cover reveals, giveaways...good stuff. Hop on over to my new website for books and more! 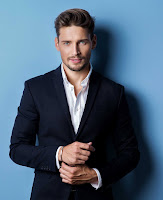 Why the hell did he bother me so much? The stranger had been standing across the street in front of the bakery for about twenty minutes, drinking something hot from a take-out cup. His coat collar was pulled up to ward off the chill of the autumn morning, the dark, woolen fabric partially obscuring his face and making it hard to tell where the fabric began and his dark hair ended. The longer length of the coat also hid the cut of his pants, though I could tell they weren’t jeans. They were probably nice, like something someone would wear to work or a funeral.

And the answer to who's creeping on the corner is...Marek Young!

Unfortunately, our hero starts out his journey creeping on Skye on the corner, hoping she'll notice him. She does...and right away, it's not favorable. But fear not, dear reader, she doesn't need to file for a protective order. He's absolutely harmless.
Stay tuned for next week's episode of #FiveSentenceFriday!
Until next time,
~Mia.
Posted by Mia Downing at 12:30 AM