Favorite Movie: I don’t have just one. I have many. Forrest Gump, The Notebook, 300, Star Wars, Twilight Saga, Grandma’s Boy, The Harold and Kumar comedies, The Bourne movies, Dirty Dancing, The Boy in the Striped Pajamas, …As you can see, they range from serious to silly.

Favorite Color: Green. It’s the dominant color of nature, and I love the outdoors.

Favorite book/author: The Millenium Series by Stieg Larsson, To Kill a Mockingbird-Harper Lee, the Anita Blake Vampire Hunter series by Laurell K. Hamilton, The Vampire Chronicles by Anne Rice, Stephen King’s Colorado Kid, Gerald’s Game, and The Langoliers; Pride and Prejudice by Jane Austen, all the Harry Potter books. The list goes on.

How do you feel about bacon? I tried to be a vegetarian, but bacon wouldn’t let me. I do advocate the humane treatment of animals. I don’t see why we can’t make their lives happy, and healthy, and full of love. I don’t eat meat often anymore, but when I do, bacon is high on the list of wants.

The REAL questions…
Tell us a little about yourself.
I am a journalist from San Antonio, Texas. I’ve been writing for newspaper locally since 2006. Prior to that, I worked in medical administration doing referrals, then billing, billing management, and finally, office management. One day I realized I wasn’t happy doing that anymore, so I went back to school and earned my degree in Radio, Television, and Film Broadcast at San Antonio College. This brought me back to writing. I missed writing. It was something I used to do when I was a kid. I made the transition to newspaper, and then to online contribution for magazines and websites. I’ve interviewed a wide range of celebrities from actors like Rudolf Martin, to sports figures like former Spurs Center, David Robinson. To date, my most cherished interview was with former UN Ambassador, Sichan Siv, who served our country working for both the Bush Sr. and Bush Jr. administrations. He also authored his own biography, The Golden Bones. It was the most intense thirty minutes of my life. From online contribution, I segued into writing books. My first was a children’s fiction titled The Cat Who Wanted to be a Reindeer. I wrote it to work through the grief of losing my beloved cat, Sam. I even drew all the illustrations. I had no idea exactly what I was doing, but it’s still out there, and it’s nice knowing kids are reading it and experiencing just a little of my Sam. After that, I wrote Harvest, a short story horror/sci-fi that I finished in a creative writing class (which was inspired by a true UFO sighting, by the way, and described in the book). My professor urged me to publish, so I did. The second book in the Harvest Trilogy, Celluloss, is due out in December as well. I’m well on my way to completing two series and beginning a third.

Connect with Michele E. Gwynn on the Web...

Blog, The Write of Way:  http://michelegwynn.blogspot.com/

What’s under your bed? Hmmn. Well, probably a cat. I have four.

What comes first, plot or characters?
For me, it’s the plot. The idea of the story comes to me first. Then, I begin thinking about characters.

Oddest thing on your desk?
I have a birthday card pinned to the wall above my monitor. It’s a bulldog farting on a dandelion. It makes me laugh to this day. It was from my best friend, Tony.

What’s your most interesting writing quirk?
I need to be alone to write. It has to be quiet, so it’s usually the wee hours of the morning when I write.

What is the hardest thing about being an author?
I’d say the hardest part is just getting yourself out there. Writers are generally private and solitary creatures. I am. Having to market myself is not easy. I’d rather be writing.

What’s the easiest thing about being an author?
For me, it’s the ideas. I have several, and they usually come to me in really strange dreams, so I write them down. I’m not short on ideas at all!

What do you wish someone had asked you for an interview question?
I suppose whether or not I include my own personal values in a story. The answer is…sometimes, yes. I’ll point out issues in the plot or use the characters to make a point. I also like to weave in a lot of facts. The more factual, the more believable. Mostly, my stories all, so far, shine a spotlight on an issue I wish more people would pay attention to. In Harvest, it’s the humane treatment of animals. In The Cat Who Wanted to be a Reindeer, it’s about liking and accepting who you are, and being thankful for what you have. In Exposed, I highlight the global problem of sex trafficking of women and children, and that theme continues in book two.

Tell us about your latest release!
Exposed: The Education of Sarah Brown is about the sexual self-discovery of a young woman who has lived her life so far caring for her terminally ill mother, isolated from venturing out into the world. It’s also about how her journey to discovering who she really is leads to finding love, and also experiencing pain; the pain of loss, the pain of guilt, and physical pain. She grows as an individual, but in the process, finds herself caught between two men; one who wants her body, but not her love, and another who decides her body is not enough. He wants more. One of the two men has a past that threatens Sarah’s future. And while she indulges her sexual appetite in Berlin, a predator sets his sights on her and the younger brother of her new friend, Elsa Kreiss. Enter Detective Joseph Heinz; a man who is hanging on by a thread after failing to find the missing daughter of close friends five years before. Unable to solve the case, and to forgive himself, he resorts to drinking which results in divorce; losing his wife, his daughter, and very nearly, his job. The story is about redemption for each character, and how their lives change after meeting Sarah. Will she survive, or will the pursuit of pleasure be the death of her?

Blurb for Exposed: The Education of Sarah Brown

The Dangers of Sex

Sarah Brown sets out on a journey to sexual self-discovery and falls face first into danger. In Barcelona, Anthony de Luca, an author and photographer unleashes the full force of his charm that threatens to steal her heart, a prize he openly admits he doesn’t want. Still, she can’t resist him, and finds herself experiencing the heights of ecstasy and the lows of heartbreak as her lover leaves without a word. In Berlin, Paul Christiansen, a handsome Dutch lothario with a sordid past works his wiles to seduce her body; while in the shadows, a predator stalks a young boy close to Sarah determined to get what he wants or kill anyone who gets in his way. One of her two lovers has led a dangerous criminal straight to her door, but which one? And who can she trust? Will Sarah survive or will she lose both her heart and her life to desire?

Excerpt for Exposed: The Education of Sarah Brown

Total sexual immersion…in a dungeon on the seedy side of Berlin! 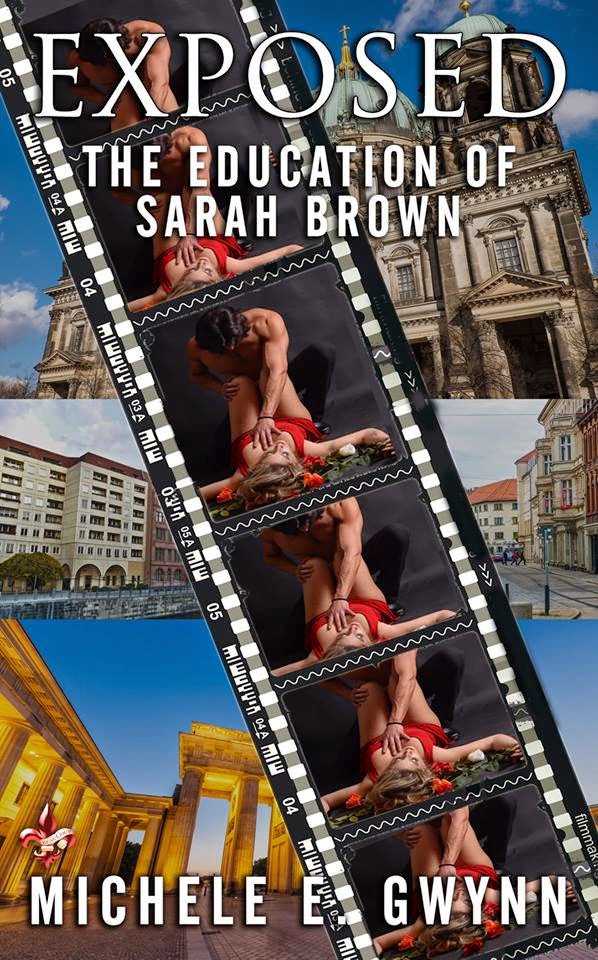 “I won’t let them hurt you, Sarah.  If you say yes, you’ll be helping them out, and I can promise you will truly enjoy the experience.“  Elsa looked her straight in the eye and said this with sincerity.

“But Mr. Christiansen will be watching the entire time?“  Sarah tried not to let the excitement over the idea of being watched, and worked over by three beautiful women show in her voice.

She looked at all three women one at a time, hesitating still, then answered “okay“.  Nicolette hugged her tight pressing their breast together and Nadia clapped her hands together proclaiming “Ser gut!“

Elsa took Sarah’s hand and disentangled her from Nicolette’s arms.  She led her to the center of the room where silken cords hung from the ceiling.  She looked towards the large window wall mirror and nodded indicating that they would begin.

Elsa picked up a black scarf from a side table and proceeded to wrap it around Sarah’s head covering her eyes.  She tied it tight.  The blindfold would help her new friend feel less self-conscious.  If she couldn’t see the expressions on everyone’s faces, their reactions, then hers would be more natural, uninhibited.  “Now strip.“ 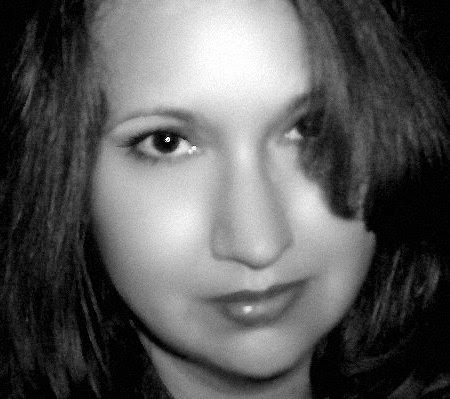 Michele E. Gwynn is a freelance journalist in San Antonio. She writes for newspapers, magazines, and online websites like Examiner.com (under the categories of Film, Animal Rights, Healthy Food, and Sex and Relationships), Yahoo Voices, Alwayz Therro Magazine, and more. She also edits websites and books - recently editing the debut supernatural romance novel, Lone Wolf Rising, by Indie author Jami Brumfield, her next novel in a new series, The Witch's Vampire - Mystery Springs Unleashed, PBI Files series shorts, and Ghost Connection I and II. Prior to her career in writing, Ms. Gwynn worked first as a referral coordinator, billing manager, then office manager for a dermatology practice.

For discriminating bibliophiles, there is also a science fiction short published in a charity book for which all funds raised will help build a new library: Tales and Poems from Universal City, Texas (Synthesis by Michele E. Gwynn)

As if that weren't enough, she has published three adult shorts under the pen name Xaviera Snow. (On Amazon.com)

Much of her career has been spent interviewing all manner of celebrities for Examiner.com, and hometown newspaper and magazines. Life has been kind, and these interviews can be found on her blog (see page). She resides in the small town of Schertz, Texas on the northeast side of San Antonio with her four felines who so graciously allow her to reside in their home.

Connect with Michele E. Gwynn on the Web!

Thanks for stopping by...